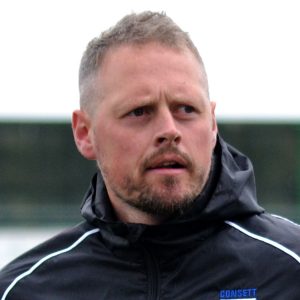 Andy, who was with Whitehaven and Workington during his playing days, joined the backroom team just before the start of the 2019-20 season.

A holder of the Uefa ‘A’ licence, he is senior lecturer and practitioner in sport coaching/PE at Northumbria University in Newcastle, and head coach of the England Universities men’s football team.

Worked at the Bolton Wanderers and Stoke City academies before relocating to the North East, and had a spell as manager of Northern League side Penrith.

He was appointed as Consett’s interim manager on 29 November 2021 following the departure of the previous management team to Blyth Spartans.

His position was confirmed as permanent on December 26 after two wins and a draw in his first three games, and he appointed well-respected non-league coach Paul Bryson as his assistant.

Despite a mid-season injury crisis which arguably cost Consett top spot, his side were promoted via an end-of-season inter-step play-off at Histon. He’s carried out a major revamp of the squad ahead of stepping up to the NPL.