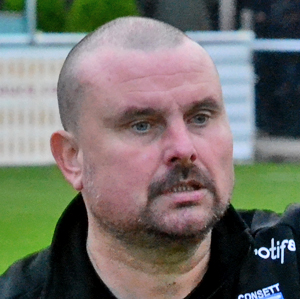 Gavin took over as club physio early in the 2021-22 season after the departure of Rachel Davison, who he had previously assisted and deputised for.

Consett is a club which runs in his veins, as he’s been part of the management team for the Consett Bulls junior side for 13 years, and is proud to see them graduate into open age adult football this season in the Wearside League.

His son Kieran, who’s made the bench for the first team on a couple of occasions, captains the team, which now plays as Consett Reserves.

Don’t let Gav tell you one of his jokes though – you’ll need treatment afterwards!