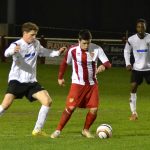 Consett eased through the 1st Round of the Durham Challenge Cup on this day in 2014, winning 5-2 at Ryhope CW – with the game effectively decided in six dramatic first-half minutes.

Manager Kenny Lindoe made just one change to the side which had drawn with Newcastle Benfield for the Tuesday night game, with Mark Eccles coming in at left-back, and Josh Gray pushing into midfield in place of the injured Jonny Wright.

Ryhope included two popular ex-Consett players in their starting XI, goalkeeper Barry Poskett and midfielder David Pounder, pictured top, and both were to play prominent roles in an incident-packed first half.

Pounder got the home side off to the perfect start, collecting a cross from the left and smashing a left-footed effort into the top corner from 25 yards after just two minutes.

Within a minute Poskett had spread himself well to save an effort from Aris Guerin-Lokonga, with Michael Mackay’s follow-up effort blocked by a defender.

Calvin Smith then hit a 25-yard free-kick well over the top, before supplying the incisive pass for Aris Guerin-Lokonga to level on 12 minutes, drawing the keeper and firing home.

Ryhope had a couple of half-chances before the incident on 23 minutes which probably changed the entire course of the game.

Guerin-Lokonga latched onto a through ball and his lob looked certain to put Consett ahead until Poskett instinctively threw up his hands as he raced out of his area to meet The keeper handled the ball on the edge of the D, and after consulting his linesman, the referee showed him a straight red card.

Player-manager Gary Pearson went in goal, but his first task was to pick the ball out of the net three minutes later as Josh Gray‘s cross from the left squirmed under his body at the near post.

Within a minute it was 3-1 as Consett regained possession from the kick-off and Gray’s cross gave Michael Mackay an easy finish from seven yards.

Then on 29 minutes Smith touched a free-kick shot to Josh Gray, who rifled a shot into the top corner to make it 4-1.

The home side were reeling, and eight minutes before half-time a wonderful Smith pass sent Michael Mackay clear, and the striker finished with aplomb past the stand-in keeper for his 21st goal of the season.

Matty Slocombe had a shot blocked, Gray sent another just wide of the far post and, right on half-time, Guerin-Lokonga was denied what looked a clear penalty when he muscled his way past by two defenders and was pulled back, only for the referee to bottle the decision and blow his whistle for half-time.

At 5-1 up, Consett had effectively booked their passage into the 2nd Round and a game at Gateshead, so it was no surprise that they took their foot off the pedal a little.

Chris Youldon was brought on for the second half in place of Ryan Bell, while Ryhope made two changes, bringing on teenage goalkeeper Anthony Rooke for Pearson and midfielder Nathan O’Neill for right-back James Cook.

Within 10 minutes of the restart they’d made it clear that despite being a man shot, they were going to give it a go, as first left-back Martin Metcalfe and then midfielder Matthew Weirs tested Chris Elliott. The Consett keeper then had to get down smartly at his near post to a free-kick from Weirs.

At the other end, Smith hit the bar with a looping header from an Eccles cross, and then wasn’t too far away with a well-struck effort from 25 yards which flew just over the bar. Ryhope had a good chance to reduce the arrears when Weirs’ left-wing corner was headed down by O’Neill, and Craig Hughes volleyed into the ground and over the bar.

Consett made a couple more changes, bringing on Danny Craggs for Carl Piecha (with Slocombe moving to centre-back) and Chris Moore for Gray, and it seemed to perk up their somewhat flat second-half display.

Moore’s pass gave Mackay a chance to complete his hat-trick, though Rooke did well to save at his feet and then benefited from a fortuitous ricochet.

Then Guerin-Lokonga looked odds-on to score after the keeper spilled a left-wing cross, until his shot took a deflection off a defender, hit the post, and was scrambled clear. Rooke did well again to keep out a 25-yard free-kick from Eccles, diving full-length to his right to push it around the post.

To their credit, Ryhope kept taking the game to their higher-ranked opponents, and got their reward with an 89th-minute consolation goal from Metcalfe, who drilled a low shot past Elliott.

The final minute saw Mackay net from a rebound after Rooke couldn’t hold onto Moore’s shot, but the striker was denied by the linesman’s flag, and Consett had to settle for a 5-2 passage into the next round.