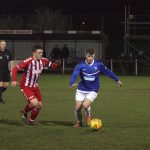 Consett’s interest in this years’ Durham Challenge Cup came to an end at the quarter-final stage as they were beaten 4-2 in a penalty shootout at Seaham Red Star, after a 1-1 draw, bringing their magnificent 19-game unbeaten run to an end.

The Steelmen went into the game with a much-changed forward line, with Michael Mackay, Thomas McAloon and Max Russell starting in place of Dale Pearson, Luke Carr and Ali Alshabeeb who were all nursing knocks.

The changes also meant that recent signing Dean Briggs and youngster Antonio Agostinho made their seasonal debuts on the substitutes bench.

The home side looked to be going through in normal time thanks to a first-half goal from striker Dan Wilson.

However, despite playing with 10 men for most of the second half as a result of a red card for Matty Slocombe, Consett levelled late on with a Ross Wilkinson header to send the tie to penalties.

Home keeper Chris Bannon proved to be the hero for Seaham as he saved penalties from Calvin Smith and Darren Holden, while Kyle Hayes was only able to save one Red Star spot kick.