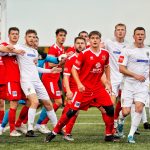 The Seasiders, who needed a last-minute goal on the final day of last season to avoid relegation, took their chances when it mattered to leave Belle View with a 3-2 win – the same scoreline by which they won at Consett in the FA Cup the previous season.

The Steelmen made a positive start to the game, and had a ‘goal’ ruled out for offside on 10 minutes, but two minutes later the visitors took the lead. Mark Broadley picked up the ball in midfield and beat a couple of men before firing into the bottom corner to make it 1-0.

Consett enjoyed a lot of possession as the half wore on, forcing a series of corners and creating a few half-chances, and few could argue that they deserved their equaliser in the 42nd minute.

After some good work down the left by Evan Horwood he slipped the ball to Jake Orrell, whose pinpoint cross picked out Zak Atkinson to head home from 10 yards for his fourth goal of the season, pictured below.

The score remained 1-1 at half-time, though Consett had a let-off in injury time when a header from Jack Bulless was cleared by Ben Milburn, with Bridlington claiming it had crossed the line.

Consett started the second half on the front foot, and in the 49th minute Orrell brought the best save of the game from keeper James Hitchcock, when he unleashed a well-struck effort from 25 yards.

Bridlington took the lead for the second time on 77 minutes when Consett keeper Mark Foden came for a left-wing corner through a crowd of bodies but couldn’t reach the ball, leaving Jack Bulless with a simple header to make it 2-1.

Six minutes later it was 3-1, and again Foden came under scrutiny. Coming for another corner, this time he reached the ball, but his punch was weak and fell straight to right-back Benn Lewis, who fired it straight back past him to put Town in the driving seat.

Substitute Declan Bisset gave Consett hope in the 89th minute when his 25-yarder from Atkinson’s knockdown beat the keeper with the help of a big deflection off a defender, pictured below.

The game ended in controversy when, with five minutes of time added and Consett pushing hard for an equaliser, Hitchcock claimed he’d been kicked in the head by the following-in Kieren Aplin.

The Consett man protested his innocence, but the referee decided it was a yellow card, and precious seconds were wasted by the keeper’s flagrant time-wasting.

When the final whistle went the keeper’s over-the-top celebrations in front of supporters behind the goal did nothing to endear him to the Consett faithful.

This and other results saw Bridlington leapfrog Consett to go fourth in the table, while the Steelmen dropped three places to sixth, just outside the play-off positions. 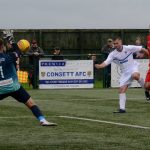 Consett took the lead after nine minutes when recent signing Olly Scott crossed from the left and Stephen Callen volleyed in from six yards, for his first goal for the club.

Dale Pearson hit the post, Callen fired another chance into the side netting and the Seasiders keeper Charlie Dixon made a good save from Jake Orrell as the Steelmen dominated the first half.

They had a let-off in the 39th minute when Bridlington had the ball in the net with their first real attack, but were saved by the linesman’s flag.

Consett hit the woodwork for the second time when Luke Carr’s free-kick on the stroke of half-time missed everuone in the box and came back off the post.

But they were made to pay for missed chances when Bridlington equalised in first-half injury time, Danny Earl going on a run down the left and finishing in off the near post.

A minute into the second half Consett regained their lead. James Martin’s ball through the middle was dummied by Callum Guy, and Dale Pearson took it in his stride before smashing a shot into the net from 20 yards, pictured below.

The winning goal came on the hour, when Bridlington skipper Pete Davidson went on a surging run and played a neat one-two before firing a low shot past Hayes.

Orrell was denied by another good save from Dixon, pictured top, and Pearson and Martin both fired into the side netting as Consett strived for an equaliser.

But the visitors defended resolutely, their game management was good, and they saw out the rest of the game, to take their place in the next round, despite being distinctly second-best in the first half.

Our next game is on Tuesday night, when we play Bishop Auckland in a Division One fixture at Belle View, KO 7.30pm.