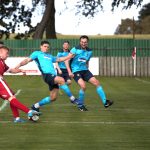 Consett exited the FA Trophy in the second qualifying round today as they were defeated 1-0 by Northern Premier League Division One West side Colne.

A poor first half performance from the visitors saw the home side take an early lead and it proved to be the only goal of the game.

The Steelmen improved after the break but couldn’t fashion an equaliser and the Lancashire side progressed to the next round.

Consett manager Andy Coyles made one change from the game at Lincoln, with Lewis Green coming in for Declan Bisset, while striker Oscar Taylor, a new signing from Newton Aycliffe, made the bench.

Colne’s Holt House ground has a pronounced slope and it was the home side who had the advantage of kicking downhill in the first half.

They controlled most of the early possession, but Consett were defending comfortably until the 15th minute, when they didn’t deal with an attack down their left.

Full-back Tom Fagan made good progress into the penalty area and his ball found centre forward Owen Watkinson, who had the time to steady himself and shoot across Mark Foden from 10 yards, giving the keeper no chance.

Chances were few and far between for the rest of the first half, but the second half saw Consett enjoying much more of the ball.

They had a let-off in the 58th minute when Colne’s Craig Carney hit an excellent shot from 25 yards that rattled the crossbar.

The Steelmen’s best chance of an equaliser came on 62 minutes. Jake Orrell swung in a corner from the left which Zak Atkinson met with a firm header that was destined for the bottom corner, only for home keeper Andre Mendes to somehow claw the ball off the line.

On 69 minutes Darren Holden looked certain to score from six yards out after excellent work from Karl Byrne and Orrell, but his goalbound effort was superbly blocked by home skipper Paul Dugdale.

In an attempt to fashion an equaliser, Consett threw on Oscar Taylor, a new signing from Newton Aycliffe, for his debut, and in a final throw of the dice, big centre-back Ben Milburn was sent on in the 90th minute to play up front.

The ploy almost worked, as Milburn nearly scored with his first touch as he met a long throw in from Holden at the far post, only to see his effort cleared off the line by Colne sub Charlie Russell.

Despite five minutes of added time, it wasn’t destined not to Consett’s day and it was Colne who advanced, with their visitors left to focus on the league and Durham Challenge Cup.
* Full match report, more pictures and statistics HERE.

** Many thanks to Andy Mitchell Photos for today’s match pictures. See more of his work HERE. 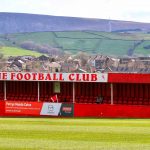