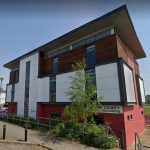 Durham FA has today told affiliated clubs – including Consett – that they cannot have more than 150 spectators at games, in a bid to try to stem the rise in coronavirus cases.

It has issued a joint statement with Northumberland FA, after working closely with local authorities across the area, which means we can no longer have 300 spectators at games.

The DFA statement said: “It has become clear that the resurgence of Covid-19 infections are strongly related to social gatherings that do not abide by guidance provided, especially regarding travel, social distance, washing of hands and face coverings, especially in hospitality areas.

“Although it is recommended that spectators do not attend games, we have acted to address this position, while keeping participants actively playing football on the pitch wherever we can.

“It is imperative that you do not attend or participate if you are displaying any symptoms of Covid-19, are awaiting a test result or are part of a household which is self-isolating. Please remember to consider Government messaging regarding ‘Hands. Face. Space.’ Whenever possible.

The following restrictions will apply from midnight on Thursday 24 September to all football affiliated with Northumberland FA and Durham County FA.

These restrictions are above and beyond central FA guidance on the Return to Football which must be adhered to.

Durham County FA’s chief executive John Topping said: “As we are all aware, the North East of England has been placed under local restrictions following the increase in the number of Covid-19 cases, which has mainly arose due to social gatherings.

“These restrictions have impacted on many people and are also having a detrimental effect on their health and well-being.

“Following positive meetings between Durham County FA, Northumberland FA, the Football Association, local authorities and other organisations, we are delighted to announce that a return to football with necessary restrictions in place can commence from Friday 25 September 2020.

“I am sure all will agree that a return to playing football is beneficial for all, but we MUST adhere to guidelines put in place so that we do not end up with a total lockdown of football. The position is scheduled to be reviewed on 7 October.” 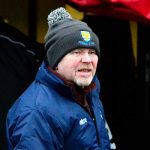 David Pyke, the long-serving secretary of both Consett AFC and Consett Juniors, has today been honoured by The FA and McDonald’s in the national Grassroots Football Awards.

He has been named Volunteer of the Year for the Durham FA area for the 2019-20 season.

Dave – who has been first team secretary for 13 years, and the administrative rock of Consett Juniors for much longer – didn’t even know he had been nominated until he received the letter to say he’d won.

The citation said: “In a season which was unfortunately cut short as a result of the ongoing Covid-19 pandemic, The FA and McDonald’s Grassroots Football Awards celebrate and recognise the inspiring work that has taken place throughout the 2019-20 season. This is our opportunity to celebrate Durham County’s grassroots football heroes.

“The FA and McDonald’s Grassroots Football Awards are for people who make a positive difference. It’s our way to celebrate the fantastic individuals who put their heart and soul into the grassroots game across Durham FA and say a huge ‘thank you’ to the incredible volunteers who inspire us all.”

As well as arranging first-team games and being responsible for player registrations and matchday admin, Dave liaises with the coaches and secretaries of all our teams from four-year-olds to over-40s. He even gets to watch games sometimes (when he’s not acting as ballboy – see above).

He joined Consett Juniors as an U12s coach in 1994 with ex-Consett player Barry Poole. They won the league in their first two seasons and were with the team all the way through to U18s, with a few of the lads tasting first team football under Colin Carr.

He became secretary of Consett Juniors in 2000, leading the club to become a Charter Standard Club in 2001 and Community Club in 2006.

He became secretary of the first team too in 2007, and his ambition for the juniors and seniors to come under the same umbrella became possible when we moved to the new stadium in 2013.

Consett AFC as a whole was also named as runner-up in the grassroots club of the year category, behind South Tyneside Ability Football Club, which provides a place for people with disabilities to play the game.

Consett AFC Chairman Frank Bell said: “We are delighted to receive recognition for our ongoing efforts to build a real community club around the facility we have at Belle View. It’s a mark of everyone’s efforts.

“A club is only as good as the people who run it, and in Dave the first team and the juniors have one of the best volunteers in grassroots football anywhere, not just in County Durham.”

“As a player, coach and administrator he has given more than 50 years’ service to the game. This award is richly deserved.” 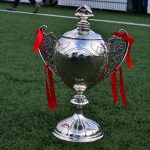 The draw for the opening round of the 2020-21 Durham County Challenge Cup has been made by Durham FA – but it doesn’t affect Consett.

Although three Northern League 1st Division clubs will be taking part in the Preliminary Round, we aren’t one of them.

Bishop Auckland, Ryhope CW and Hebburn Town have all got ties in the opening round of seven fixtures.

Nine more clubs have byes, and another 16 – including ourselves – are exempt until the 1st Round.

Our previous win before that was in 2007 (read all about that here), and the one before that in 1969, when we became the first Wearside League club to lift the famous old trophy (recalled here).

The 1st Round is due to take place in the week preceding Saturday 19 December.