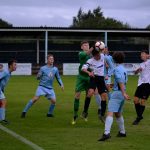 Consett’s youngsters staged a tremendous comeback as they stepped onto the national stage tonight in the FA Youth Cup.

But the late rally which saw them come from three goals down to draw 3-3 and force extra time ended in disappointment when they lost 3-2 to Carlisle City in a penalty shootout.

Consett AFC Bulls U17s were representing the club in the preliminary round of the national competition, and faced a tough test against the youngsters from the Northern League newcomers.

They found themselves a goal down at Gillford Park – the former home of Celtic Nation – after just five minutes when Charlie Johnston fired home a loose ball.

And five minutes before the break Johnston made it 2-0, leaving the Consett lads with a tough second half.

Keeper Niall Frampton kept them in it with a couple of good saves, but it all appeared to be over bar the shouting when Cameron Smith made it 3-0 on 61 minutes after a goalmouth scramble following a corner.

But the last half an hour saw the Consett lads really roll up their sleeves and battle in the rain which had started lashing down.

The home goalkeeper made a string of good saves, and Consett had a shot cleared off the line as they began to exert heavy pressure on the Carlisle goal.

Substitute Lewis Ord got what appeared to be a consolation goal on 79 minutes, but five minutes later Joshua Bainbridge grabbed a second to make it an interesting closing period.

Incredibly, on 86 minutes Bainbridge scored again with the goal of the game, a superb curling effort which dipped over the keeper to make it 3-3.

Just when it looked like Consett might snatch a remarkable win, the tide turned against them in the fourth minute of added time, when they had a player shown a straight red card for a challenge in midfield.

It looked harsh, and when the final whistle went a minute later, it meant they faced another 30 minutes in strength-sapping conditions with only 10 men.

Extra time was a cagey affair, with just a couple of chances for each side, and Ord came close to snatching a dramatic winner in the 114th minute, but Carlisle keeper Will Graham punched away his top corner-bound effort.

When extra time failed to separate the sides, it was down to the lottery of penalties, and it was Carlisle who held their nerve, winning 3-2 to progress to the next round, and a home tie against either South Shields or Gateshead.

But even in defeat the young Bulls did Consett proud, and will be a name to look out for in the Durham FA U17s League this season.