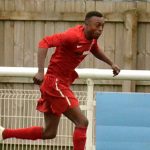 Consett picked up three very welcome points on their travels at Penrith thanks to a dream debut by Aris Guerin-Lokonga on this day seven years ago.

He scored both goals as the Steelmen won 2-1 to maintain their unbeaten record at the Blues’ new home ground, Frenchfield Park.

Manager Kenny Lindoe made three changes to the side beaten at Billingham Town four days earlier. The absence of centre-backs Carl Piecha and Scott Martindale meant Matty Slocombe moved to left-back, and Ian Davidson and Ryan Bell into central defence, with Andrew Cuthbertson and Liam O’ Mahoney coming into midfield, while Guerin-Lokonga, a deadline-day acquisition from Sunderland RCA, took the place of Steven Aiston up front.

Penrith, who were only out of the relegation zone on goal difference, were desperate for points, but it was Consett who started the brighter, and they took the lead after just six minutes through Guerin-Lokonga. A cross from the left by O’ Mahoney went across the face of goal, and was picked up by Calvin Smith on the right, who put it back into the middle. The new boy, pictured top, headed home from 10 yards, giving home keeper Jonny Jamieson no chance.

On 12 minutes, Consett thought they had doubled their lead when a Smith free-kick found Guerin-Lokonga, and his scuffed shot fell to 24-goal top scorer Michael Mackay, but his celebrations were cut short by a linesman flagging him offside. This stung the home side into action and for much of the rest of the half they matched their visitors, with chances at either end.

Penrith’s Steven Ainsworth shot wide after Kevin Connelly had headed a cross down for him, while at the other end Consett right-back Michael Pearson hit the bar with a well-struck 20-yarder. The Blues’ top scorer Scott Allison had a shot charged down, and Connelly went close, but Ben Jackson had the best chance and was unlucky to see his shot drift wide with keeper Chris Elliott well beaten.

However, with just four minutes to go to half-time, a mix-up in the home defence allowed Mackay to steal possession, and he fed Cuthbertson, who made it to the by-line and supplied Guerin-Lokonga with a simple tap-in to put Consett 2-0 up.

The second half continued in much the same vein, with midfield exchanges dominating the game. O’ Mahoney had a chance on 53 minutes from Mackay’s pass, but his shot looped over the bar. At the other end, Matthew Read tested Elliott with a low shot which he turned round his left-hand post.

Guerin-Lokonga had a chance to complete his hat-trick and put the game beyond Penrith’s reach on 71 minutes when Craig Robson played him in, but the striker shot tamely at Jamieson in the home goal.

The introduction of Martyn Coleman for Will Paul saw Penrith take on a much more attacking stance, and the change paid dividends when Grant Davidson’s powerful downward header on 79 minutes bounced over Elliott and into the net to give the hosts some hope.

The last 10 minutes saw Penrith camped out in the Consett half, but too often the final ball was missing. The best chance came on 82 minutes, when Allison hit a curling shot just over the top.

The Steelmen were mightily relieved to hear the final whistle, which meant they remain unbeaten in four visits since Penrith moved to Frenchfield, and gave them three points to lift them comfortably away from the relegation zone.