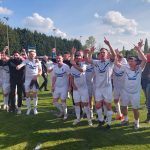 Consett will be playing Northern Premier League football for the first time in their history next season after a 2-1 win in the inter-step play-off at Histon today.

Scott Heslop gave them the lead in the 44th minute after latching onto a long ball from Dan Capewell and keeping his cool to finish past the keeper.

Dan Marriott put Consett in control in the 52nd minute, with a delicate lob to make it 2-0.

Histon got one back through Luke Lindsay in the 73rd minute when Consett failed to deal with a long throw.

But they held onto the lead, with keeper Kyle Hayes making a vital stop deep into the seven minutes of injury time. 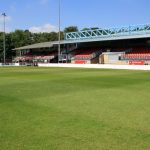 Cambridge club Histon FC stand between Consett and a first-ever promotion to the Northern Premier League.

They finished third-bottom (18th) of the Northern Premier League Midlands Division and face a play-off for the right to remain at Step 4 next season.

They face Northern League runners-up Consett in an inter-step play-off, in a one-off game for the right to compete in the NPL next season.

Consett will be running a supporters’ coach to the game, details of which will be confirmed in the next 24 hours.

Only two of those wins came at home, and they drew seven home games, losing the other 12.

The 2021-22 season was Histon’s first in the NPL, after they were moved from the Isthmian League. They had previously played in the Eastern Counties League, Southern League and the Conference top flight, as well as both its North and South divisions!

2008-09 was the best season in Histon’s history, finishing third in the Conference (now the National League), only to lose a two-legged play-off semi-final 2-1 to Torquay United.

The same season also saw them reach the FA Cup 3rd Round, where they were narrowly beaten by Championship club Swansea City after knocking out Swindon Town and Leeds United.

Consett and Histon have never met in any competition, but there is one tenuous link between the clubs: goalkeeper David Knight, pictured below, who made two appearances for us in 2017-18, also had a spell at Histon, playing a dozen games for them in 2010 after being released by Darlington.