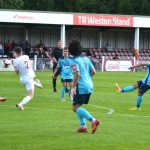 Consett went third in the Northern Premier League Division One East today after a hard-fought 1-0 win at Lincoln United.

Jake Orrell’s fifth goal of the season – his third in his last four games – gave the Steelmen the points on their first-ever visit to Ashby Avenue.

On 10 minutes Consett were within a whisker of taking the lead with a great move. It started with Calvin Smith’s superb crossfield pass, which picked out Orrell on the left.

He sent in a wicked cross, which Zak Atkinson was inches away from connecting with, and Adam Mitchell, coming in at the back post, couldn’t quite direct his shot on target, pictured below.

On 27 minutes Consett went close again through Cyril Giraud, who cut in from the left and unleashed a shot which the keeper found too hot to hold, but the rebound evaded the following-in Atkinson.

As half-time approached Atkinson brought a second good save from Lincoln keeper Liburd Hines, after good work by Mitchell and Giraud.

The Steelmen got what turned out to be the winning goal in the second added minute at the end of the first half. Mitchell fed the ball out to Jake Orrell on the left of the penalty area, and the midfielder took a touch before picking his spot in the top corner, pictured top.

The second half was very scrappy, but Consett defended resolutely, and went close to doubling their lead in the 80th minute, when Lewis Green’s acrobatic volley from Orrell’s cross was superbly saved by Hines, pictured below.

They had another chance to seal the points in the 84th minute, when Atkinson directed a header just wide from Orrell’s free kick.

But with Calvin Smith and Dan Capewell in particular outstanding at the back, Consett saw the game out comfortably to head home with three hard-earned points. 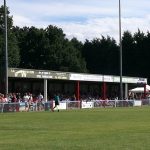