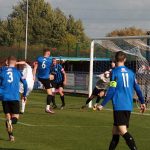 The game got off to a sensational start with both goals being scored in the first ten minutes. The home side took the lead with barely four minutes on the clock. Jamie Walker crossed from the left wing and the ball somehow found its way into the Consett via a deflection which totally deceived Mark Foden.

The lead didn’t last long though as Consett levelled the scores four minutes later. Karl Byrne crossed from the right wing, Kieren Aplin played the ball back across goal and Matty Slocombe was on hand to force the ball home from six yards

After the early fireworks, the game settled down into a more attritional affair with neither side managing to gain the upper hand. Long Eaton’s best chance of the half fell to Kam Campbell in the 36th minute, who drilled in a low shot from inside the area, which Foden initially spilled but safely gathered the rebound.

Two minutes before the break Zak Atkinson saw a header from an Even Horwood cross loop just over the bar, and the break was reached with the score 1-1.

Consett were creating the better chances in the second half, and a great strike from Adam Mitchell in the 58th minute was brilliantly tipped over by the Long Eaton keeper, Mitchell Leivers. From the resulting corner, the ball ended up in the Long Eaton net but the referee spotted a foul and disallowed it.

Nine minutes later, Consett had the best chance of the half when Byrne’s cross from the right was flicked on by Atkinson and Cyril Giraud, with almost his first touch after coming on as a substitute, stretched for it and stabbed the ball over from close in.

Honours were even at the final whistle, after highly entertaining and competitive Northern Premier League match. 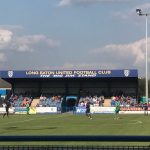 With no game this Saturday, our next match is away to Long Eaton United on Saturday, 8 October, with a 3pm kick-off. It will be our sixth consecutive away match in all competitions.

The usual limited number of places are available to supporters now on the official club coach to the game, priced £20. Call at the ground or phone 01207 588886 to book. Please note that seats must be paid for in advance.

Like Consett, Long Eaton are also in their debut season in the NPL, after being promoted as champions of the United Counties League Premier Division North.

They play at Grange Park in Station Road, Long Eaton, which is in Derbyshire, despite being beside the River Trent. It is close to the Nottinghamshire border, and has a Nottingham postcode (NG10 2EF).

The football club is most famous for producing Garry Birtles, a striker who Brian Clough signed for Nottingham Forest for £2,000.

He went on to win two European Cups with Forest in 1979 and 1980, and was capped three times by England in a career which also included spells at Manchester United, Notts County and Grimsby Town.

The journey from Consett to Long Eaton is 156 miles, and should take just under three hours via the A1(M), M1 and A52.