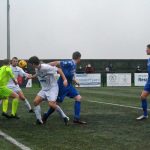 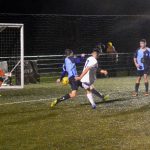 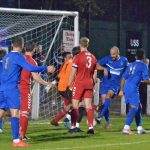 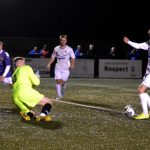 Consett kicked off their season tonight by progressing into the next round of the FA Cup with a 3-2 win over Ryhope CW, with summer signing Carl Lawson helping himself to a debut double.

He put the Steelmen ahead in the 63rd minute, pictured above, and 10 minutes later added a second goal, which turned out to be the winner.

Lawson and the club’s other summer signing Lewis Green both started the Extra Preliminary Round tie, while Matty Cornish made a second debut, two years after his first.

But it was a familiar face, Darren Holden, who gave Consett the lead after six minutes, firing in off the base of the post, pictured, after good work by Cornish and Lawson.

Former Consett player Jack Walker headed Ryhope level from a corner on 35 minutes, and an even first half ended 1-1.

Consett were grateful to Kyle Hayes for a vital stop in the 61st minute, and two minutes later they retook the lead, as Carl Lawson fired home the rebound after Cornish’s effort was saved.

Sub Ali Alshabeeb missed a golden chance to wrap up the game on 61 minutes, putting Jake Orrell’s cross wide from a couple of yards. But a couple of minutes later Carl Lawson made it 3-1 when his curled cross from the right somehow ended up in the net without anyone in the middle touching it.

Ryhope scored an injury time consolation when Robbie Bird stuck one in the top corner from out wide on the left, but there was barely time to restart, and it was Consett who have a home tie against Northern Premier League side Ossett United in the Preliminary Round on Saturday 12 September. 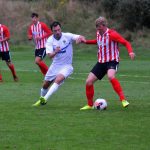