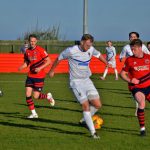 Consett lost the inaugural ‘Steel Cup’ today – but more importantly saw their lead at the top of the Northern League cut to six points by a 2-1 defeat at Redcar Athletic.

It was the same scoreline by which the newly-promoted Teessiders won at Belle View three weeks ago, giving them a league double over their fellow Steelmen after our first-ever meetings.

The result tips the balance of the championship race in favour of our closest rivals North Shields, who beat Penrith 5-0, and now have 65 points to our 71, but with four games in hand.

The opening exchanges were tense, and Consett had the first real chance midway through the half when defender Matty Ridley had a header from a corner cleared off the line.

A minute later No 9 Scott Heslop looked certain to score when a Lewis Green pass sent him clear on goal, but he put his effort high and wide.

Consett did take the lead on 27 minutes, when Darren Holden’s long throw was chested down by Heslop, and James Martin fired home from 15 yards.

But the home side were level within a minute when dangerman Isaac Walker, who scored the winner at Belle View, cut in from the left and struck a shot which took a deflection which sent the ball looping over goalkeeper Ross Coombe.

Luke Carr had an effort deflected wide as Consett sought to regain the lead, and Coombe then saved well from Walker, so it remained 1-1 at half-time.

But it was Redcar who took the initiative when the game resumed, and Isaac Walker beat his man and fired in a dipping effort to make it 2-1 to the home side on 55 minutes.

Consett rang the changes, bringing on three substitutes in a bid to get back into the game, and one of them, David Dowson, pictured top, almost equalised on 77 minutes, but saw his 20-yarder come back off the base of the post.

That was as near as the visitors got to finding an equaliser, and it was a dispirited league leaders who trooped off the field as news of North Shields’ win filtered through.