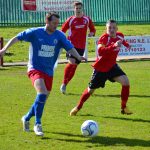 A second-half comeback saw Consett win their final away game of the season 6-3 at Sunderland RCA on this day in 2015 – but they had to recover from a 2-0 half-time deficit to bring home the three points from Meadow Park.

Manager Colin Myers made four changes to the side which had beaten Penrith in midweek, with David Brown in at right-back for Joel Dixon, Jack Walker at centre-back in place of the suspended Steven Turnbull, Josh Gray out wide instead of Chris Moore, and, perhaps most surprisingly, Luke Sullivan as the lone frontman, with top scorer Michael Mackay starting on the bench. RCA included three ex-Steelmen, Luke Richardson at left-back, Kieran Megran in midfield, and Stephen Callen wide left.

Even though neither side had anything to play for, with the home side safe from relegation and Consett sitting ninth, the game started at a frentic pace, and the visitors – wearing a mix and match strip of blue shirts, red shorts and blue socks, to avoid a colours clash – could have been in front after three minutes, when Brown’s cross from the right was helped on by Sullivan to Matty Slocombe, whose shot was deflected by a defender and rolled weakly to the goalkeeper.

A minute later they were behind, with RCA, kicking down the slope, scoring with their first attack. John Jury’s crossfield ball to Callen saw the wide man catch Brown out of position, and he passed to Clayton Davis, who rounded exposed keeper Joe Longstaff to slot home.

Consett responded by creating a glut of chances, all of which they squandered. Gray fired a 25-yard free-kick into the wall, Danny Craggs tried an effort from a similar distance but was off-target, and some good interplay between Mark Eccles, Gray and Slocombe created another opening for Craggs, who fired over from the edge of the box.

Sullivan intercepted a defender’s attempted back header to his keeper, but his lob from an acute angle dropped over the bar. Slocombe then missed a glorious chance, side-footing over the bar when an equaliser looked certain after good work down the left by Gray.

It had been all Consett, so it was ironic that when the next goal came it was again RCA who scored it. Centre-back Ross Preston pumped the ball forward, it skimmed off Dan Madden’s head and fell into the path of Joe Hughes, who made no mistake from inside the penalty area.

The goal barely jolted Consett out of their rhythm, and they continued to dominate on a bumpy, drying-out pitch which was hardly conducive to their passing game. Sullivan hit a rising effort just over after Slocombe won the ball just outside the RCA box, and on 35 minutes the No 9 missed the best chance of the game.

Eccles ball down the flank to Craggs saw the midfielder unselfishly pull the ball back for Sullivan, who somehow shot wide from six yards with the goal at his mercy. The half ended with another two off-target attempts by Gray, first from a free-kick and then in open play, and Consett’s dominance had been such that they could scarcely believe they were two down, even if the home keeper hadn’t been required to make a serious save.

Whatever manager Colin Myers said in the changing rooms at half-time obviously worked, because his team tore out of the blocks at the start of the second half, and within three minutes they had a foothold back in the game, if a slightly fortuitous one.

They were awarded a debatable free-kick out on the right, Brown whipped it in, defender Preston met it with his head, only for the ball to cannon off the back of his teammate Lee Bythway for an own goal. Four minutes later the Steelmen were almost level when Craggs won the ball in midfield and quickly fed Slocombe, who shot just over the bar.

The visitors’ tails were up now, but it wasn’t all one-way traffic. On 55 minutes they were grateful to Longstaff for a fine save from Davis, after Megran and Stephen Bogie had opened up the defence. On 63 minutes the importance of the save was underlined when Consett levelled.

A corner was half-cleared to Slocombe on the edge of the box and his shot was superbly saved by keeper Jonathan Carmichael, but as a defender tried to hack the ball clear, it rebounded off Jack Walker, who was following in, to give him his first goal for the club.

RCA tried to respond, and Davis burst past two defenders before crossing to James Armstrong, whose header went inches over the bar.

Chris Moore fires in number five
Four minutes later Consett were ahead. Craggs released Sullivan down the right, and his cross-shot fell perfectly for Slocombe to tuck away from a few yards out, with RCA’s offside pleas falling on deaf ears.

The Steelmen were now pouring forward, and Eccles went close after a one-two with Gray, while Carmichael made another good save from Craggs RCA’s hearts must have dropped when Consett made their first substitution on 78 minutes, bringing on top scorer Mackay for Brown. A minute later it was 4-2, when Craggs’ corner fell to Gray, who made up for his earlier misses by burying the ball from six yards.

It was Gray’s last involvement, as he was replaced by Chris Moore, and with three minutes left the winger got himself on the scoresheet, cutting in and thumping a shot goalwards which was too hot for Carmichael to handle.

Though Mackay and Sullivan both followed in, and each tried to claim the goal, like any good striker, the ball had already crossed the line and the goal was Moore’s. Consett were still celebrating the goal when RCA got one back with a wonderful piece of opportunism from Bogie. The ball was tapped to him at the restart, and, noticing Longstaff off his line, he despatched the ball over his head to make it 5-3, with a goal so quick many people didn’t see it.

With the game entering added time, the last word fell to Mackay – who else – when he took Moore’s pass in his stride a couple of yards inside the box and smashed home an unstoppable shot to make the final score 6-3. It was a game to give the managers nightmares about some of the defending, but a goal-laden treat for any neutrals present. 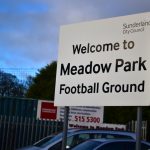 Consett’s away game at Sunderland RCA, postponed yesterday due to the effects of Storm Dennis, has been swiftly rearranged by the Northern League.

It will now take place at Meadow Park on Wednesday 22 April, KO 7.30pm – and, for now at least, will be our final game of the season.

Barring any further postponements or rearrangements, it means we now have seven league games in the last three weeks of the season – five of them away from home.