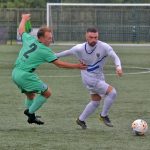 Consett made it three pre-season wins out of three today as they came from behind to beat National League side Gateshead 4-1 at Belle View Stadium.

The young Heed side took the lead on 14 minutes after a slick move down the right which saw Connor Smith’s low cross met by Mason Fawns to finish from close range.

But on 25 minutes Consett were level when Ali Alshabeeb ran on to Jake Stafford’s long pass, and kept his cool to finish past the keeper from 12 yards.

Six minutes before half-time the Steelmen took the lead, when Luke Carr picked up a loose ball 30 yards out and fired a venomous left-footed strike in off the post.

It remained 2-1 to Consett at half-time, and they thought they had a third on 58 minutes when Carr’s free-kick was headed down at the back post and a trialist finished from point-blank range, but the ‘goal’ was ruled offside.

On 72 minutes Consett did make it 3-1 when substitute Michael Brown was felled by Dabizas, and Carr stepped up to score with an audacious chipped penalty which sent the keeper the wrong way.

Then two minutes later Carr turned provider for Brown, who slammed the ball home from a pullback.

Consett could have had more, as Carr, Brown and Andre-Vasile Ardelean all had efforts well saved, but Gateshead could also have added to their tally too, as home keeper Kyle Hayes made a trio of good saves.