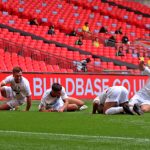 Consett AFC aim to bounce back from their FA Vase disappointment by going back to Wembley – and this time taking the Conny Army with them.

After having a taste of the big stage, Chairman Frank Bell wants to go one better by lifting the trophy next season, in front of the club’s dedicated fans.

Planning for the 2021-22 season is underway already, and season tickets will go on sale from 9am this Thursday, May 6.

Existing adult season ticket holders who didn’t request a refund for the curtailed 2020-21 season will pay the same price, £100. The price for new applicants is £110.

Concessionary season tickets, for supporters aged 65 and over, will be £60 for existing holders who didn’t require a refund, and £70 for new applicants.

Junior season tickets will remain at £20 across the board, with even cheaper deals available for Consett AFC Juniors players and coaches.

Chairman Frank Bell said: “Season ticket income is vital when planning ahead, and we really appreciate the support, particularly from those fans who didn’t ask for a refund when this season was curtailed.

“Our FA Vase final against Hebburn was an excellent advert for non-league football, at a time whe many people are falling out of love with the professional game.

“BT Sport said they had never seen such attacking, exciting football, with no yellow cards, no players diving or rolling around claiming to be injured.

“Hopefully the FA will have seen what this level of football means to those involved, and to the communities that clubs such as ours are part of.”

As well as season tickets, Consett AFC still has a few programmes and a limited number of virtual tickets left for anyone requiring a souvenir of our unforgettable Wembley appearance*, with proceeds from the latter going to local good causes.

* The match being played behind closed doors meant no official programme was produced by The FA, so we produced a 48-page full colour Special Wembley Edition of our matchday publication The Steelman.