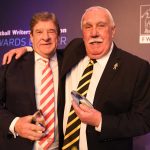 Consett have been recognised by the region’s football writers for making club history by reaching the 2020 FA Vase final.

The North East Football Writers’ Association (FWA) held its awards dinner last night at Ramside Hall in Durham, and the club received an award, as did our Wembley opponents Hebburn Town.

Consett AFC chairman Frank Bell and his Hebburn counterpart Vin Pearson took to the stage together to receive awards recognising their clubs’ part in helping non-league football in the region thrive.

The game on 3 May last year was a wonderful advert for the Northern League, ending 3-2 to Hebburn after Consett twice took the lead.

As well as recognising the clubs’ achievements on the field, the awards recognised the part they played during the Covid-19 pandemic, helping their local communities and supporting the NHS.

Sky Sports pundit Chris Kamara received the Personality of the Year award for 2021, while Sunderland AFC’s Luke O’Nien picked up the 2020 award, after last year’s dinner was cancelled.

Durham Women duo Beth Hepple and Sarah Robson received the FWA Women’s Player of the Year awards for 2020 and 2021 respectively.

Funds raised on the night were donated to the Sir Bobby Robson Foundation, which has raised over £16m to benefit cancer patients in the North East and Cumbria and plays a significant role in the international fight against the disease.