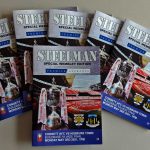 Consett AFC are counting down to the biggest day in the club’s history, when they take on fellow Northern League side Hebburn Town in the FA Vase final at Wembley on May 3.

Sadly, the Government’s roadmap out of lockdown means the game will take place behind closed doors, with only a few representatives of either club present, instead of thousands of supporters.

The fact there will be no crowd means The FA won’t be issuing an official match programme, to the disappointment of fans and collectors alike.

However, conscious of the fact that many people tuning in to watch the game live on BT Sport will want a souvenir of the big day, Consett AFC have produced their own.

Road to the FA Vase final

Produced by programme editor Gary Welford in association with non-league programme specialists FootiePrint.co.uk, it’s packed with features and pictures from our road to Wembley.

Arj also takes us inside the dressing room, while midfield maestro Luke Carr tells us what it’s like to play, score and win the FA Vase final at Wembley, and there’s a selection of fans’ good luck messages to the lads for the big day.

We turn the spotlight on our opponents too, looking at their route to the final, and the players we’ll face under the shadow of the famous arch.

Virtual match tickets, priced £8, are also available, along with special FA Vase commemorative shirts and banners. Every ticket purchased will help local youth causes and the If U Care Share Foundation, which works to prevent suicides.