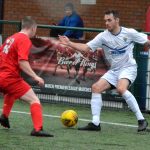 The 11th hour cancellation of today’s opening friendly might mean that Consett fans have to wait a little longer to see their first match in seven months.

Scheduled opponents Billingham Synthonia pulled out yesterday due to the number of players they have in self-isolation.

But a full-blooded 11 v 11 practice game meant a curious few got to watch football at Belle View for the first time since December 2020.

Spectators got a first look at new striker Stephen Callen, pictured top, a summer signing from Sunderland RCA, as he donned the No 9 shirt for the Whites v the Reds.

It was odd seeing teammates like Dale Pearson (Reds) and Ross Wilkinson (Whites) on opposing sides, but the game quickly settled into a good rhythm, with chances at either end.

Jake Orrell gave the Reds the lead after 24 minutes, only for a trialist to equalise for the Whites early in the second half.

The decisive goal came two minutes from the end, when Darren Holden scored for the Whites, to give them a 2-1 win.

Consett will play their opening pre-season friendly at 7.30pm on Tuesday, 6 July, when they host Morpeth Town.

Admission is £5 for adults, £3 for concessions and £1 for under-16s, with spectators urged to sign in using the NHS App, for track and trace purposes.

The bar and snack bar will be open, though it’s table service only indoors, and masks must be worn until you’re seated. 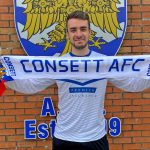 Consett have today made their first close-season signing in the shape of Sunderland RCA forward Stephen Callen.