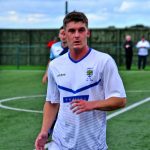 Midfielder Nathan, pictured above, who can also provide cover at full-back, has rejoined from Bishop Auckland, where he went in the summer in search of more regular football.

The 22-year-old, who originally signed in October 2016 from Durham City, made the bench for the midweek game against Guisborough Town, and is hoping to add to his 75 games and five goals for the Steelmen.

Today, Thomas McAloon, who can play in midfield or up front, rejoined the club, which he left in March 2017, from Sunderland RCA.

Tom, 24, originally signed in February 2017 after being released by Middlesbrough, and played five games before moving to Bishop Auckland, Newton Aycliffe and then RCA.

A Consett lad, he is a Northern Ireland Under-17 international.