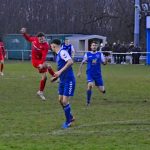 Consett made it 19 games unbeaten today with a 5-0 win in their first league visit to Thornaby in 15 years – and it was a game full of landmarks.

The first was a 30th goal of the season in the same number of games for big striker Dale Pearson. After a nip-and-tuck first half-hour at Teesdale Park he was fouled as he tried to go past centre-back Nathan Guru in the 31st minute, and picked himself up to score from the penalty spot.

Pearson almost doubled the lead early in the second half when he rounded the keeper, but left-back Scott Howes to make a brilliant clearance off the goal-line.

But the Steelmen did make it 2-0 in the 64th minute when Calvin Smith became a member of the select band to have scored 50 goals for the club. The midfielder picked the ball up 25 yards out and left fly with a decent right-footed effort, pictured above, which crept under Thornaby keeper James Dawson.

Scott Howes was then lucky to stay on the field when he was shown just a yellow card for a late challenge on Pearson, who had to be helped off the field.

Consett were well in control, but the final scoreline had a slightly flattering look as they again showed their ruthless side, scoring three goals in four minutes in the closing stages of the game.

A minute later substitute Thomas McAloon recorded his own personal landmark moment, scoring his first goal for the club by robbing the last defender of possession before slipping the ball past Dawson for 4-0.

And in the 84th minute Michael Mackay, who had replaced Pearson, got his first goal since returning from injury, deflecting a shot past the keeper to make it 5-0. It was the club legend’s 321st Consett goal.

It was almost six when Ali Alshabeeb set up Mackay with four minutes to go, but this time Dawson saved with his legs to deny the evergreen striker.

That’s 14 goals in four days for Consett, who remain fourth in the table, six points behind both second-placed Shildon (2nd), who they have a game in hand on, and are yet to play at home, and third-placed Hebburn Town, on whom they have two games in hand.