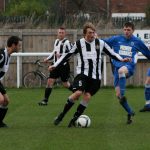 A Consett side missing five regulars pulled off an excellent win at the home of the Northern League’s third-placed side, despite being reduced to 10 men, on this day in 2009.

As well as long-term absentees David Gordon and David Duke, manager Kenny Lindoe was unable to call on injured skipper Carl Piecha, or the unavailable Chris Scott or Jonjo Dickman for the Northern League 1st Division game at Woodhorn Lane.

He still fielded a strong starting XI, with three changes from the previous game, a 2-2 draw with Morpeth. Goalkeeper Danny Staples had served his suspension for being sent off against Bishop Auckland the previous month, David Scorer was restored at centre-half, and Andrew Burton returned at left-back, though the bench was a little thin.

With just a couple of minutes gone, some excellent interplay down the left by Mattie Moffat and David Pounder saw Prof’s delicious touch wrongfoot a defender and put Steven Johnson through. But Stevie delayed for just long enough for the Colliers to regroup and prevent him getting a shot away.

A quick throw-in by Steven Huggins to Pounder gave the Steelmen another opportunity when he found stand-in skipper Gary Ormston, whose ball to Moffat was cracked just over the bar.

After some tentative opening exchanges, it took 15 minutes for either side to seriously trouble the other’s goal, and when it came it was Ashington who came within a whisker of opening the scoring. They broke down the right, and a ball pinged to the back post saw Keith Douglas connect sweetly with the ball at full stretch, only to see his shot cannon off the crossbar, with the goalkeeper beaten.

Moffat tried his luck from 25 yards after winning the ball from the centre-half, but, to the jeers of the vociferous home fans, it flew high and wide.

A Steven Huggins corner caused some mild panic in the Ashington box after keeper Karl Dryden came for it, flapped and missed, but Johnson was unable to take advantage, and the danger was cleared.

Scorer headed over from a corner and Johnson was unable to pick anyone out with a hard, low cross across the face of the goal after Moffat and Ormston combined well, as Consett began to take control.

They really should have scored when they were awarded a free-kick for a foul on Ormston as he surged towards the box. Burton took the kick quickly after spotting Moffat making a run to the back post, but the striker couldn’t keep his shot from six yards down.

On the stroke of half-time Moffat had an even better chance when Ashington only half-cleared a corner, and Pounder lobbed the ball back into the danger area. It was kept alive by Ormston, and Moffat found himself with a free header from six yards out, which he put straight at Dryden.

Within two minutes of the restart Moffat had another chance, latching onto a loose ball and trying to prod it home when power would surely have produced a goal. Moffat put in another good shift, and on another day, with a few more games under his belt, would have had a hat-trick.

Andrew Cuthbertson then placed a shot agonisingly wide of the right-hand post after a flowing Consett move. But when the deadlock was broken on 51 minutes it was Ashington who scored, completely against the run of play.

Former Consett winger David Colvin advanced down the left and sent in a hard, low cross, which was met a few yards out by Andrew Burton. Unfortunately, the pace on the ball was such that he was unable to steer it away from goal, and only succeeded in putting through his own net.

Four minutes later things went from bad to worse for the Steelmen. Centre-back Paul Collins handled a through ball 25 yards out, and the referee decided he had prevented a goalscoring opportunity, and showed him a straight red card, which seemed a little harsh to say the least.

Most of the travelling supporters probably feared the worst, but after a reshuffle which saw Burton go to right-back, Michael Coulthard come into the middle and Pounder drop to left-back, Consett took the game by the scruff of the neck.

On 58 minutes captain-for-the-day Gary Ormston capped an industrious display by heading home Huggins’ corner from six yards out, taking him to 10 goals for the season.

And on 67 minutes Steven Huggins put Consett in front with a superb free-kick curled over the wall from just outside the box after the referee had somewhat generously decided that Moffat was impeded.

With something to hold onto, Lindoe withdrew Johnson and brought Gavin Parkin on to shore up the midfield, but it was still the Steelmen who looked more likely to get the next goal.

Another foul on Moffat just outside the box gave Huggins a free-kick in a similar position to the one he scored from, but this time the keeper comfortably caught his effort round the wall, low to his left. And Parkin came close to opening his account for the club with a rising shot from 20 yards which just cleared the bar.

In the 86th minute, the referee could quite easily have made it 10-a-side when Colliers defender Iain Nickalls pulled back Moffat after the forward knocked the ball past him on the halfway line, but he chose to show a yellow card instead of red.

Tremendous last-ditch tackles by Nickalls and Paul Dunn then halted Moffat as through balls twice left him one-on-one with the last defender as Consett looked for a clincher.

Ashington rarely threatened in the second half, though one ball flashed across the face of goal by substitute Josh Race had Staples scrambling, and the keeper then had to be at his best to keep out a powerful injury-time drive from the same player.

The game ended controversially, when Burton needed lengthy treatment and had to be substituted after being knocked out by what appeared to be a flailing elbow, but again the referee only showed Scott Blandford a yellow card when the offence might have merited a different colour.

When the final whistle went it was a fully deserved three points against a side who were just starting to believe they had an outside chance of the championship, and would eventually go on to finish 6th – their best in 29 years.