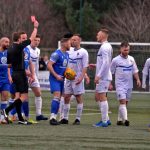 Favourites Consett crashed out of this season’s FA Vase, losing 2-1 to Wythenshawe Town in the 4th Round on an afternoon of drama at Belle View.

They took an early lead, played most of the second half with 10 men, and then conceded a late goal which gave the impressive visitors the win.

Jake Orrell got the Steelmen off to the perfect start after just three minutes, picking up a loose ball outside the box, taking aim, and dispatching a superb strike into the top corner, giving the keeper no chance.

On eight minutes they almost doubled their lead when Luke Carr went on a run which took him past three defenders, and his effort had to be tipped over the bar by the keeper.

Wythenshawe – who Consett beat on their way to the 2020 final – served notice that they were much more of an attacking force this time round when Brad Byrne hit the post with a header on 15 minutes.

Consett keeper Kyle Hayes then denied the same player with his feet, before Consett had a great chance at the other end, as Dale Pearson volleyed over from Darren Holden’s whipped-in cross.

With little to choose between the sides, it remained 1-0 at the break, but the tie swung Wythenshawe’s way on 51 minutes when Consett’s Matty Slocombe was shown a straight red card for an elbow.

The player going down holding his face didn’t help, and nor did most of the visiting team surrounding the referee, but the incident gave the official a decision to make, and he made it.

The visitors were dominating possession, but Consett defended well, and on the odd occasion that Wythenshawe found a way through, they couldn’t find a way past Hayes.

He saved well from Dominic Smalley, then produced an even better stop from Steven Hewitt, flinging himself to his right to keep out his well-struck effort.

Consett were struggling to get out of their own half, and it took until the 85th minute for the 10 men to produce an attempt on goal, sub Nick Allen firing wide when a corner was half-cleared to him on the edge of the box.

The incessant pressure on the Consett goal finally told in the 90th minute, when, with the game looking like it was heading for penalties, Wythenshawe grabbed a winner.

Consett lost possession in the middle of the field, Byrne’s pass sent Matty Bryan away down the right, and his cross picked out Darius Palma at the back post. He brought it down and fired home to make it 2-1 and end Consett’s brave resistance.

When the final whistle went after seven added minutes it was Wythenshawe celebrating a place in the last 16 with their supporters, after claiming their third Northern League scalp in their best-ever FA Vase run. 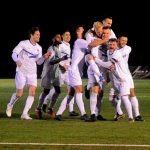 Consett were today handed a home tie in the FA Vase 4th Round draw – against Wythenshawe Town, who we beat on our way to Wembley for the 2019-20 final.

The game will take place at Belle View Stadium on Saturday 15 January 2022, with a 3pm kick-off. We are the third Northern League opponents they will have faced in this year’s competition.

Wythenshawe are fourth in the North West Counties League Premier Division, and beat Billingham Synthonia 3-0 in the 3rd Round at the weekend.

They started this season’s competition with a 6-0 win over Litherland REMYCA in the 1st Qualifying Round, then beat Bacup Borough 3-2 on penalties after a 3-3 draw.

Our 3rd Round meeting in 2019-20 resulted in a 1-1 draw at Wythenshawe, and the FA ordered that the game be replayed at our ground due to our opponents fielding an ineligible player.

The replayed game saw Consett edge through 1-0 thanks to a stunning late strike by Dale Pearson, which sparked the celebrations pictured top. 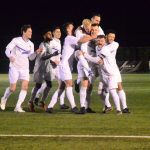 Dale Pearson’s 23rd goal of the season was enough to take Consett through to the FA Vase 4th Round as they edged through 1-0 against a dogged Wythenshawe Town side.

The visitors came and parked the bus, defending in numbers and resorting to timewasting tactics from the start in an effort to frustrate their hosts.

For most of the game it worked, though in the first half Calvin Smith’s dinked effort hit the top of the bar, and visiting keeper Callum Jakovlevs saved at full stretch from Darren Holden.

The NWCL side had one glorious chance, when Kyle Hayes had to make an excellent save from Jerome Wright, but it took a clearance off the line at the other end by Max Lewens in added time to keep the scoreline 0-0 at the break.

Consett had more chances in the second half, and Ali Alshabeeb had the chance to be the hero when he raced through in a one-on-one with the keeper, who stood up well to save.

The winning came goal in the 80th minute when Luke Carr’s corner from the left was only half-cleared, and Dale Pearson curled a tremendous strike over the keeper from 20 yards.

The result means Consett will be at home to Leicestershire side Lutterworth Town in the 4th Round on Saturday 11 January. 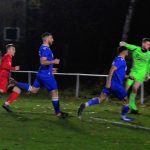 Consett will be in the hat for the 4th Round draw of this season’s FA Vase – but face a replay against Wythenshawe Town to secure their passage.

The Steelmen and their hosts couldn’t be separated after two hours of football at Ericstan Park, drawing 1-1 after extra time.

They weren’t at their best against dogged opponents from the North West Counties League Division One South, though both sides will feel they could have won the tie at the first attempt.

After a goalless first half, the Manchester side took the lead in the 72nd minute when Consett keeper Kyle Hayes brought down Jack Timmins in the area, and Brad Byrne fired home from the penalty spot.

Six minutes later Consett were level as Dale Pearson scored his 22nd goal in 22 games, heading in from close range, pictured, after Wouter Verstraaten had helped on Luke Carr’s cross.

Consett finishing the game strongly, but were denied a winner by home keeper Callum Jakovlevs, and 30 minutes of extra time failed to find a winner.

The replay will take place at Belle View Stadium at 3pm on Saturday, 7 December, which means our scheduled league trip to Guisborough Town is postponed. 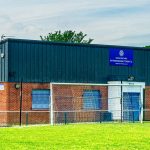 Consett’s next FA Vase opponents will be Wythenshawe Town, who beat Northwich Victoria in tonight’s 2nd Round replay.

The two North West Counties League sides drew 5-5 on Saturday, but the lower-ranked side – who play in the NWCL 1st Division South, won the replay 2-1.

The result means Consett will travel to their Ericstan Park ground in south Manchester on Saturday, 30 November for the 3rd Round tie. Travel details will be announced in due course. 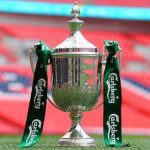